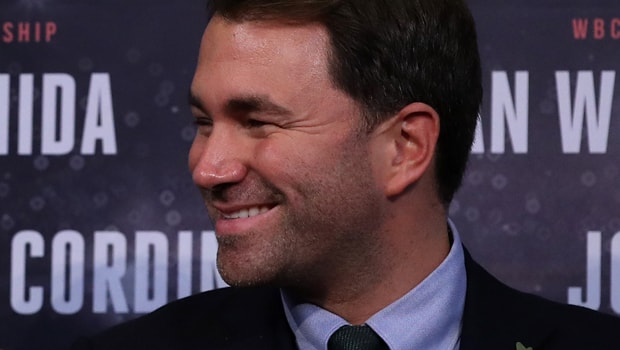 Promoter Eddie Hearn has urged WBO heavyweight champion Joseph Parker to pick up the phone as he attempts to negotiate terms for a bout with Anthony Joshua.

The New Zealander is one of three champions in a competitive heavyweight division and it looks like he is on course for a collision with the IBF and WBA ‘Super’ champion Joshua.

Hearn recently revealed that Joshua is set for a string of high-profile fights in 2018 as he attempts to unify the division, with WBC champion Deontay Wilder in his sights while fellow Brit Tyson Fury is also understood to be on the agenda.

However, it appears that negotiations with Parker’s team have ground to a halt after claims of a derisory offer.

Parker has taken to Twitter to criticise Hearn and his team for offering up half of what they gave to Charles Martin in 2016, claiming: “@anthonyfjoshua thanks for offering me less than half of what you paid Martin, to unify! Do you really want to fight? Make a serious offer #NeverBeenDropped @d_higgins_duco @EddieHearn.”

Joshua’s promoter says the Kiwi has been misinformed and has urged Parker, or anyone from his promotion team at Duco Events, to pick up the phone.

“I’m not sure what Parker was told, but his tweet was incorrect,” Hearn exclusively told Sky Sports.

“They haven’t even replied to my offer, other than via tweets. We are not interested in the ‘he said, she said’.

“If they want to make the fight then they should come off social media and pick up the phone.”