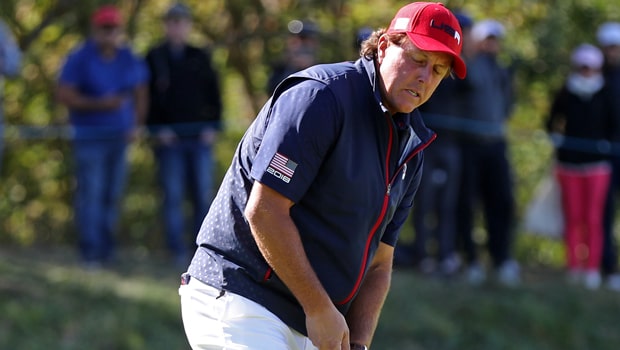 Fans’ favourite Phil Mickelson made history on Thursday as he hit every fairway to make a strong start to his bid for a fifth win at the AT&T Pebble Beach Pro-Am in California.

The 48-year-old fired home an opening six-under 65 on the Monterey Peninsula course to move to within one of first-round leaders Brian Gay and Scott Langley.

Mickelson endured a quiet front nine before turning on the style to give himself a great chance of victory. He is chasing his 50th career win and hit all 13 fairways – the first time he recorded a 100 per cent success rate in that department on the PGA Tour since 1998.

“History was made today,” he said afterwards. “To the best of my knowledge it’s taken me 27 years and a few months to hit all fairways in a single round in a competition. I may have done it before, but I don’t ever recall doing it.

“I don’t think I’ve ever done that before, certainly in competition, so that was a big milestone for me. I putted very well, too, although my speed was off. I ran a number of putts by, but I made a lot of them coming back and made a lot of short ones.”

Saudi International winner Dustin Johnson remains the favourite to win the event at 5.00 while Mickelson has shortened to 13.00. Australia’s Jason Day also scored a 65 and he is 6.00 to lift the trophy for the first time.