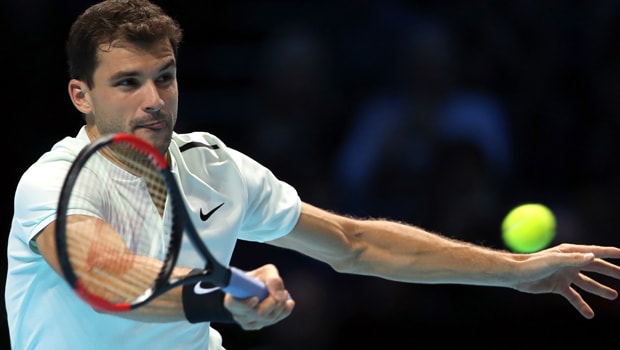 Bulgaria’s Grigor Dimitrov has claimed “the sky is the limit” for him in 2018 after he started his ATP Finals campaign with a win over Dominic Thiem.

Dimitrov recorded his first ever win at the tournament on his debut but was nervous during Monday’s contest.

He charged into a one-set lead against Thiem but then started to crumble under pressure, with his rival claiming the second. Dimitrov wasted his chance to win on his own serve before Thiem handed him a lifeline after two double faults.

The 26-year-old eventually won his opening round-robin match in the Pete Sampras Group thanks to a scoreline of 6-3 5-7 7-5.

Dimitrov went into the event with three tournament victories in 2017 and is now the world number six.

Victory over a man two places higher in the rankings has boosted his confidence and he is expecting more success.

“It’s a special moment for me for me but also I hope for my country,” Dimitrov said.

“For people just to realise that whatever you put your mind to, if you push those boundaries every day, if you work hard the sky is the limit.

“I’m super-excited for what’s ahead. I’m already looking for the next season.

Getting excited also a little bit for the off-season which is not the most exciting time, but I’m getting excited. I think that’s a good sign, right?”

Dimitrov will be confident of starting his season with a win at the Australian Open in January and he is priced at 34.00 to go all the way Down Under.