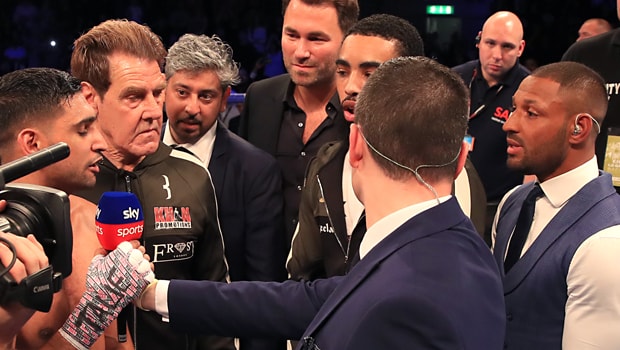 Khan made his return to the ring against Lo Greco after almost two years out of the sport, but he was far to classy for the Canadian.

The Bolton-born fighter put Lo Greco down on the canvas twice inside 40 seconds before the referee had to step in and end the bout.

King Khan admitted that he was nervous ahead of his comeback but revealed he is hoping to return to world title level in the near future.

“I was a little nervous, but I am back with a big bang,” Khan said.

“I have been out the ring for two years but I was still in the gym working hard, I have never taken a day off. I wanted to prove a point coming back.

“I want to become a world champion this year or next year.”

Long-standing rival Brook quickly entered the ring post-fight and the pair were involved in a verbal exchange in front of the sell-out crowd in Liverpool.

Brook recently got his career back on track with a second-round stoppage of Sergey Rabchenko and he believes he can “deal” with Khan if they agree terms on a fight. “Amir, come on, Amir,” Brook said.

“I’m not Lo Greco, I’m Kell Brook, ‘The Special One’ and I will deal with him.

“I know he’s got very fast hands. I’ve sparred with him. He’s got the fastest hands I’ve been in with. Timing beats speed, I’m a seasoned pro, I will land that bomb on him, that brownie. I’ll destroy him.”