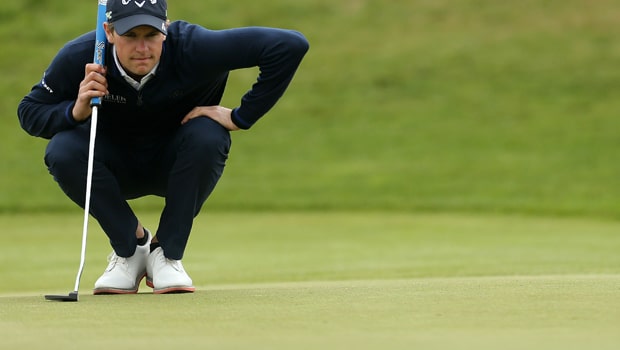 Belgian pair Thomas Pieters and Thomas Detry carded a battling foursomes score of 71 in very tough conditions to take a share of the lead heading into the weekend at the ISPS HANDA World Cup of Golf in Melbourne.

The wind was swirling around The Metropolitan Golf Club throughout round two while heavy rain also helped ensure playing conditions were tough.

The field was a combined 109-over par in round two, with only four teams posting under-par rounds in the alternate shot format. Pieters and Detry were near flawless in their one-under-par effort, moving to a ten-under total alongside joint overnight leaders South Korea, with Byeong-Hun An and Si Woo Kim carding a level par 72 in the foursomes.

English duo Tyrrell Hatton and Ian Poulter had a mixed day but fought for a 74 that left them sharing third spot, just two strokes off the lead, alongside Italian pair Renato Paratore and Andrea Pavan, India’s Gaganjeet Bhullar and Anirban Lahiri, and Malaysians Gavin Green and Ben Leong.

The Belgian duo were delighted with their work in round two, with Pieters praising his partner’s putting and his own impressive display from the wet and heavy sand traps. “I think we played very solid,” said Pieters.

“Both of us were pretty on. The short game was pretty good today. It’s nice to know when I hit it to five feet he’s always going to make it. I told him if he puts me in the bunker, it’s fine.”

Detry added: “Waking up this morning and getting here, it was just like horizontal rain. The wind got up and didn’t drop so it was just a tough day all around. Happy it’s done and I’m excited for my shower tonight.”

Belgium are 3.50 favourites to win the ISPS HANDA World Cup of Golf, while England are 6.00 at the halfway stage and Scotland are 26.00.