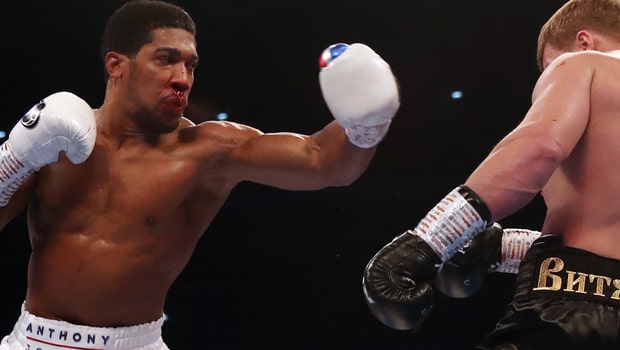 Anthony Joshua says facing and beating Jarrell Miller in New York is part of his strategy to leave a legacy behind him in the heavyweight division.

Joshua will fight in the US for the first time when he defends his IBF, WBA and WBO titles against the 30-year-old from Brooklyn in June.

Miller has 23 wins and a draw on his record from 24 professional bouts but he has never before fought for a world title. Joshua admits that his next opponent is the “softest puncher in the heavyweight division” but Britain’s unified heavyweight champ says the fight will make sense in the long run.

He admits that he aims to be considered as one of the sport’s greatest heavyweights when his career is over and Joshua anticipates a straightforward success at Madison Square Garden this summer.

“Me beating Miller may not make sense on June 1 but it may make sense in five years. Everything is building towards creating that legacy,” said Joshua.

“I could hype him up but I will keep it real. Miller can’t punch, he hasn’t got that much of a good work-rate – I’ll throw more output punches.

“He’s the softest puncher in the heavyweight division. There is no fairytale story – the facts and stats show I will beat Miller and knock him out. That’s the truth in plain sight.”

Miller is relishing a first appearance at Madison Square Garden in his home city and argues that he can defy his underdog status. He vows to bring Joshua to his level and suggests the champion wanted an easier fight in New York than he is going to get.

“I’ve worked hard for this. He didn’t want this fight, he wanted an easy fight first, he wanted Dillian Whyte,” said Miller at their press conference.

“He has got to earn to sit at my table. This is the gutter table, not the posh table. He can be the pretty boy but I’ll grind it out.”

Miller is 6.50 to win in New York, while Joshua is overwhelming favourite at 1.13.