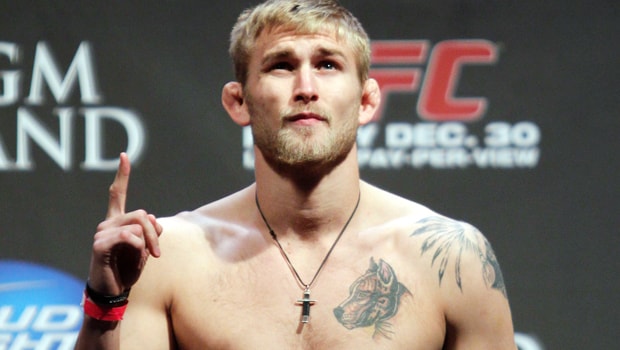 Alexander Gustafsson has sent out an open challenge to Luke Rockhold with the Swede vowing to knock out the American if he makes the step-up to Light Heavyweight.

Rockhold, a former UFC Middleweight champion, is still recovering from a tough loss to Yoel Romero but that has not stopped Gustafsson from calling out the Californian.

The 31-year-old Swede, who fights at Light Heavyweight level, has sent a warning shot to the American, insisting he will be waiting if the 33-year-old decides to jump up in class. “@lukerockhold, your teammate [Daniel Cormier] is holding MY Division hostage, and you think there are only easy fights at LHW,” Gustafsson wrote on Twitter.

“If u think Romero hits hard, then wait till you come to the big boys.

“I want @dc_mma, and knocking u out will keep me warm in the meantime. Beware of coming up in weight because I will be standing at the front door waiting.”

Gustafsson made reference to Daniel Cormier during that Twitter post and the light-heavyweight champion, who is also a long-time training partner and friend of Rockhold, has snapped back.

“Nice timing Alexander (kick him while he’s down huh),” he wrote.

“I got a better idea tho he doesn’t fight you next. He fights Robert Whitaker, I mean sometimes that happens right. You lose your way into a title shot! #thegustafsonway.”

Gustafsson, whose UFC record stands at 18-4-0, appears to be talking his way into two potential fights although it still remains to be seen who he will go up against next.

The Swede lost to Cormier back in 2015 but he has recovered well from that defeat, beating Poland’s Jan Blachowicz and Brazilian Glover Teixeira since.