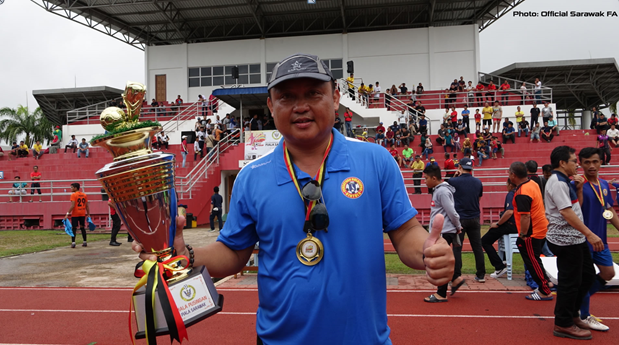 Sarawak FA Head coach Anai Igang said that he would appreciate a stalemate for Sarawak FA as the team also known as ‘The Crocs’ heads into the opening game of the Liga Premier for the 2019 season.

The 50-year-old head coach was quoted to have said this by news portal SarawakVoice.

The news portal also quoted Anai as not wanting to put up his hopes up as he is aware that his team consist of youngsters that are aged 19 to 21.

Most of the players in the Sarawak team had not played at top level football.

According to Anai, although these youngsters had improved during pre-season training, they will need more time to gel as a team with the guidance by their more senior teammates.

He added that his team is underdogs in the Liga Premier, and therefore he does not want to set the bar too high just yet.

Anai also elaborated that the whole 2019 Sarawak FA team would need time to adapt with each other’s abilities before becoming a formidable team.

Their next opponent is also no pushovers with Anai regarding them as title challengers in the Liga Premier.

Anai said that the team known as ‘The Jang’ is not only coached by experience and title winning Mat Zan Mat Aris, but he is also assisted by former Sarawak head coach Muhamad Zaki Sheikh Ahmad.

Mat Zan had led Melaka United to become Liga Premier champions in 2016, which Zaki is known for his ability to bring out the best in young players.

Despite his humble comments, Anai is still hopeful that his boys would create a surprise result in Paroi during the weekend with Muamer Salibasic and Bobby likely to be prime suspects to score goals for Sarawak.

The duo has proven capabilities up-front as they led Sarawak to its first undefeated title back in 2013.  Bobby himself was last season’s top Malaysian Liga Premier scorer.

Sarawak are scheduled to open their Liga Premier campaign with a visit to Negeri Sembilan before entertaining Pulau Pinang in the evening at Stadium Negeri the following week.  The match is scheduled at 9PM.

This article is brought to us by our Sports Writers Club resident columnist – Cyril Dason.