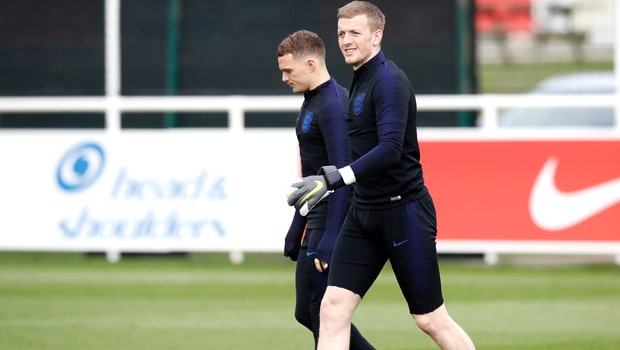 England goalkeeper Jordan Pickford has played down recent criticism about his form and he insists he will prove his worth as his side take on the Czech Republic in Friday’s opening European Qualifier.

The Everton stopper has recently been criticised after he made several errors during the 3-2 defeat to Newcastle United.

Before that he had kept two clean sheets in a row but the pressure is on Pickford, with Burnley’s Tom Heaton breathing down his neck.

Despite the increased attention, Pickford insists he is unfazed as he tries to help England get off to the perfect start.

He told reporters: “It’s great for me. I feel like, apart from the Newcastle game, I’ve been in a good run of form.

“In the Newcastle game, I made a mistake and bounced back with a good performance against Chelsea, so that shows my mentality and my character in myself, and I think that’s been good for me.

“The manager has put faith in me to start tomorrow. I’ve been training well all week as well, so that’s good.”

Borussia Dortmund’s Jadon Sancho is set to start after Marcus Rashford pulled out of the squad on Thursday.

The former Manchester City youngster will be selected ahead of the man with whom he won the Under-17 World Cup in 2017, Chelsea’s Callum Hudson-Odoi, who may make his England debut off the bench.