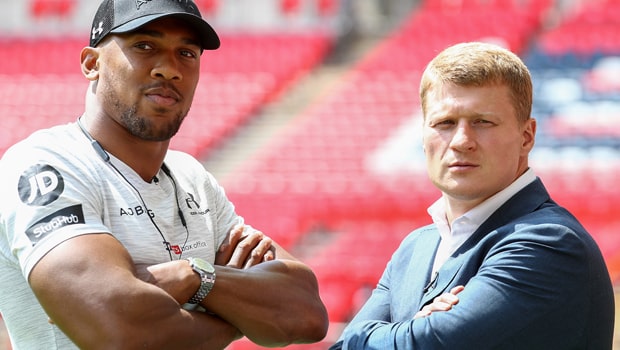 Alexander Povetkin will provide a real test of Anthony Joshua’s credentials on September 22, according to the British fighter’s promoter, Eddie Hearn.

Joshua will head into his 22nd professional fight boasting an unbeaten record, with 20 of his 21 wins coming by knockout or TKO and the Londoner is 1.08 favourite to take his record to 22-0.

Most pundits expect Joshua will claim the spoils at Wembley but Hearn feels the veteran should not be underestimated and will ruffle a few feathers in the capital.

“I’m nervous because everyone is expecting AJ to win and I don’t think people realise how hard this fight is,” he told Hayters TV.

“The independent rankings have Povetkin third in the world, it’s a tough fight and we’re taking it seriously.”

Joshua will defend his WBA, WBO, IBF and IBO heavyweight belts against ‘Sasha’, with Deontay Wilder or Tyson Fury likely to be next on the agenda should the Olympic gold medallist prevail.

Anything less than a resounding victory will doubtless see his prospective opponents take aim at the Brit, but Hearn believes that his man should be respected however he gets the win.

“It’s a shame for AJ because he might not get the credit he deserves,” he added.

“But people in boxing and people who follow the sport know about the quality, strength and danger of Povetkin.”