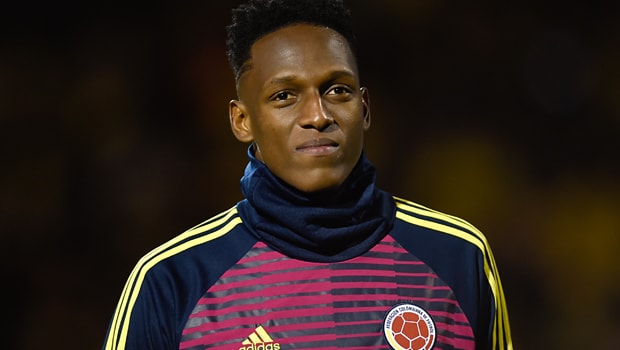 Yerry Mina marked his first match at a World Cup finals by scoring the opening goal in Colombia’s 3-0 victory over Poland on Sunday.

The Barcelona defender was an unused substitute during Colombia’s opening match of the finals, a 2-1 defeat to Japan, but he was drafted into the starting line-up for Sunday’s clash in Kazan.

Both teams went into the Group H contest knowing a defeat would see them eliminated from the tournament, but it was Colombia that coped with that pressure better, with Mina giving them a deserved lead five minutes before the half-time interval.

Mina was certainly pleased with the way his World Cup debut unfolded, but he has already turned his attention to Colombia’s final group match – a clash with Senegal in Samara on Thursday.

“I was waiting for my moment to come,” Mina said after the match.

“We were focused for 90 minutes in a match that wasn’t easy. Senegal? Let’s go with everything we have!”

A victory against Senegal would guarantee Colombia’s passage through to the knockout stages, while a defeat would see them eliminated and a draw would mean they would need Poland to do them a favour by beating Japan.

The South Americans should certainly fancy their chances of beating Senegal, although the only previous meeting between the two sides ended in a 2-2 draw back in 2014.

Colombia are priced at 1.85 to win the contest this time around, while Senegal are available at 4.33 and the draw is on offer at 3.60.