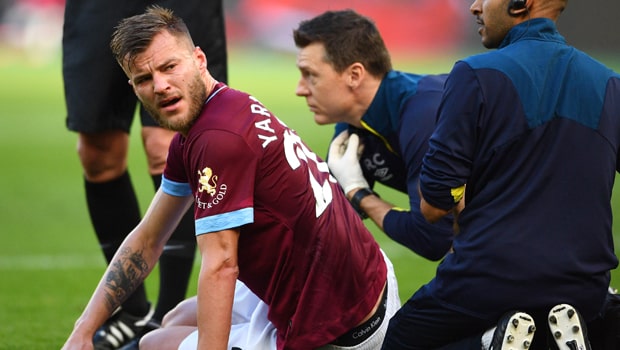 West Ham United manager Manuel Pellegrini says losing Andriy Yarmolenko to injury is a huge blow as it adds to the players already on the treatment table at the London Stadium.

Ukraine international Yarmolenko was one of nine new arrivals at the London Stadium this summer and, after a slow start to life in the Premier League, he had started to hit his stride in recent weeks.

The 29-year-old winger scored both goals in the 3-1 win at Everton last month and he has shown positive signs in every game since defeating the Toffees as he becomes more accustomed to the style of play in England’s top flight.

However, in a cruel blow, the former Borussia Dortmund star has been ruled out for up to six months after undergoing surgery on an Achilles injury picked up in the 1-0 loss to Tottenham Hotspur last time out.

Yarmolenko is the latest long-term injury for the Hammers, who are already without Jack Wilshere, Andy Carroll, Carlos Sanchez and Manuel Lanzini, and Pellegrini admits his options are limited higher up the pitch.

He said at a press conference: “It was very disappointing because he is an important player for us. He was one of the players who arrived this season to bring us more technical players.”

“We also have Lanzini and Wilshere out so that’s three players in the same position, it’s really a pity.

It is very difficult for the team.” West Ham return to action on Saturday when they make the trip to the King Power Stadium to take on a Leicester City side aiming to bounce back from Monday’s 3-1 defeat to Arsenal.

The visitors are 3.50 outsiders to come away with all three points, a draw is priced at 3.30 while the Foxes are 2.15 favourites to pick up their third home league win of the season.